Henchman Ranks All the Sherlock Episodes

The hit BBC show Sherlock ended it’s four-series run this past weekend, and I’m happy to say I was a fan right through the end. This show had a shockingly good debut all the way back in 2010 and, like everybody else, I waited patiently over the years for each new exciting installment. It made superstars out of lead actors Benedict Cumberbatch and Martin Freeman, it spawned two American clones, and it’s probably defined the character for the new century.

Sherlock was a pretty good show.

Sherlock was far from perfect, though. By seasons three and four, I think it was struggling under the weight of its own dazzling debut. The creative people involved were more weathered and deep in the business by the end, and I think they were unable to re-capture the magic of the first two seasons. But I don’t fault Sherlock. It’s still a grand achievement and a delight to watch again and again.

And since there’s a solidly finite number of episodes, I’ve decided to rank them from worst to best! In my own opinion, of course. Your thoughts may vary, and I’d love to see your own list in the comments!

Join me after the jump as I rank all 13 episodes of Sherlock!

The final season of Sherlock debuted with a mildly OK episode that mostly served to just take the wife of Doctor Watson off the board. I never really took to Mary Watson, but her death scene was still very touching and sad. The episode that preceded it, however, is pretty forgetful. The mystery of the smashed Margaret Thatcher heads is interesting for a bit, only to be quickly solved so that we can go on an unnecessary world tour with Mary and learn a random story from her history. The Six Thatchers was not a return to form for the long absent Sherlock. The early energy and mystery was replaced by lore-heavy meandering.

Charles Augustus Magnussen is one of the more forgettable villains in the show, at least for me. He’s too stodgy and too buttoned up, and when he’s not either of those things, he’s just uncomfortable, but not in a memorable way. I just didn’t care for him or his whole blackmail trickery. And he was only half the episode. The rest was all about revealing that Mary Watson was actually a super spy, a twist that I never particularly liked, especially considering I just never gelled with Mary in the first place. Actress Amanda Abbington was great, but I just never thought the character fit into the show. As such, her super secret super spy past didn’t work for me either.

11. The Hounds of Baskerville

Can I take points off The Hounds of Baskerville for not committing to a giant, evil dog? Has any adaptation of this famous story actually featured a giant, evil dog? I wanted Sherlock to go there, but alas, it was all hallucinogenic gas. The Hounds of Baskerville is low on this list because it’s largely forgettable. There was some tension and some fun to be had with Holmes and Watson sneaking into a restricted government facility, and the showdown with the fake hound is pretty neat, but most of the episode is forgettable. 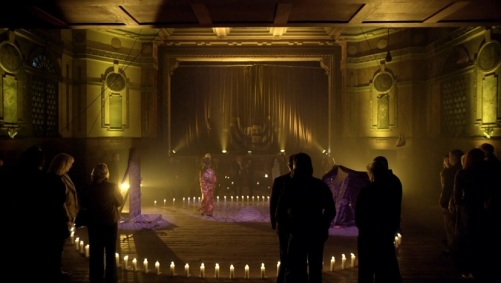 Speaking of forgettable episodes, The Blind Baker is the one I can never remember even exists. When I set out to rewatch the show from the beginning recently, I couldn’t, for the life of me, remember what even happened in only the second episode! Still, upon a rewatch, I was reminded why this episode was still fun. The Blind Banker is all about both the mystery and the growth of John Watson as a character. There is tension, excitement and clever mystery solving, along with a heroic rescue in the end. The Blind Banker may be forgettable, but it had a lot of that early Sherlock magic. 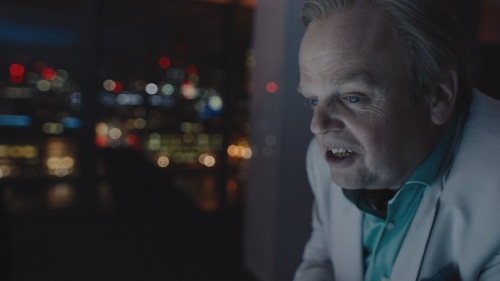 A fantastic performance from Toby Jones as serial killer Culverton Smith really raises this otherwise middling episode to great heights. Again, I feel Season 4 had lost some of the spark of the earlier seasons, dampening the whole experience somewhat. But Culverton Smith was an easily detestable villain, with the fun twist that he was a beloved national figure. And there were some solid scenes getting Sherlock and Watson back together following the death of Mary. I also really liked Sherlock’s walk with the young woman at the beginning, really humanizing him a bit, even if it turned out it was his evil sister, Eurus, in disguise (also, the reveal of the sister was very well done). 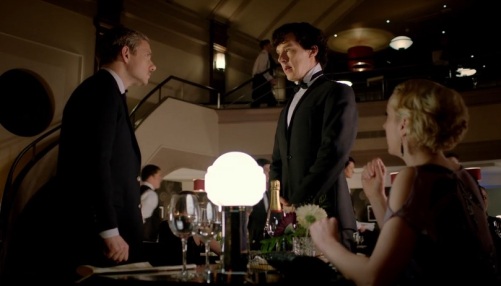 The actual mystery of The Empty Hearse isn’t all that interesting, but this episode has a ton of fun with Sherlock’s return from the grave. The scene where he surprises Watson at the restaurant is powerful, with a stunning performance from Freeman. That’s followed by a string of other reunions, all of which are pretty fun, especially the day Sherlock spends with Molly Hooper, one of the best characters on the show, who can always be counted on for some good scenes with Sherlock. The climax on the subway train is a little anti-climactic, and we never do get a proper answer for how Sherlock survived his fall at the end of Season 2, but I suppose we don’t really need an answer, do we?

This was a weird one, eh? I completely understand the random desire to do a Sherlock Holmes period piece episode in the wait between seasons 3 and 4, and I think the show pulled it off without a hitch! Holmes and Watson are really neat in their classic forms, especially Freeman’s Watson. The mystery is really interesting, with a solid reveal in the end, and the connection to the present day stuff is also pretty cool. This was a one-off bit of weirdness that everybody pushed to the nines, and I think their dedication really paid off. Definitely a worthy addition to Sherlock as a whole. 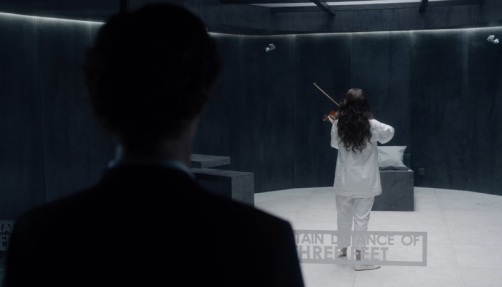 I really, really enjoyed the Sherlock series finale, even after thinking the first two episodes of Season 4 weren’t all that great. But the finale really grabbed me and held on, with powerhouse performances by Cumberbatch, Freeman and Mark Gatiss as Mycroft Holmes. I would have loved to have seen more of Eurus, instead of her always being on a screen, but she was great regardless. The gauntlet of sacrifice and detective work was a solid way to end the series, along with mysteries that stretched back into Holmes’ own childhood. I loved the ending, and how some brotherly love was enough to help Eurus, and I also enjoyed the sappy, Mary-narrated closing montage. I thought everything worked in the finale, even if it didn’t really possess the same magic as the start of the series. And that Molly Hooper scene was devastating — though I would have liked a proper epilogue for that part. Still, I felt everything else wrapped up nicely.

The episode that kicks off everything still mostly holds up as quality television! Rewatching it recently, it was amazing to see how young everybody looked, especially the two leads. We get a really great introduction to Cumberbatch’s Holmes, immediately launching the character into pop culture super stardom, and Freeman’s Watson is equally cool. The mystery is great, and the final confrontation with the cab driver is tense and fascinating. This episode introduced nearly everything we would come to love about the series, and it did so with unapologetic aplomb. Great beginning. 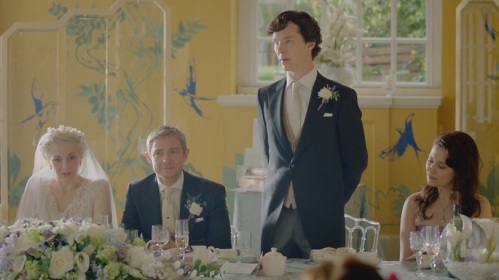 I really like the wedding episode, so sue me. It’s fun, it’s cheerful and it features some great character interaction between Sherlock and Watson. The two of them have a blast solving mysteries and being drunk. I also like the central mystery of figuring out who is going to die at the wedding and how. It’s neat. But the best parts of the episode are the ones that recognize and celebrate the friendship between the two men. Sherlock’s proper best man toast is truly touching, and I love the use of the “Vatican cameos” signal mid-toast. Stuff gets real at that point!

Jim Moriarty, played by Andrew Scott, is another larger-than-life character adaptation in Sherlock! He’s nothing like anyone might expect of Moriarty, and that makes him better than perfect as Holmes’ arch-nemesis. His debut in the final 10 minutes of this episode are electrifyingly cool, setting up his proper return in the following season. The episode lading up to his reveal is nearly just as good, with Sherlock pushed to the limit as he solves one mystery after another in Moriarty’s game. The tension, the great characters and the mysteries all come together to show us just why this series took off like it did.

The stakes are never higher, the terror is never more real and the characters are never more perfect than in Sherlock‘s final showdown with Moriarty. All the build up, all the excellent character work by Andrew Scott, comes to a head in this thrilling adventure. Sherlock and Watson are spun around and around as Moriarty lays out his master plan, one definitely worthy of the villainous genius, and worthy of the wait. He’s so good, even the audience is wondering what’s right from wrong, and we’ve already seen Moriarty as the bad guy all this time! The episode gets great moments out of all it’s characters — with another stellar couple of Molly Hooper scenes — and ends in a tragic gut punch. This episode might as well have been the true finale of the series, if not for the fact that Sherlock Holmes shouldn’t have stayed dead.

1. A Scandal in Belgravia

How do you top the greatness of Moriarty? With Irene Adler, apparently. The introduction of The Woman, played by Lara Pulver, and her subsequent dalliances with Sherlock Holmes make for my favorite episode of the series. She’s a compelling character in her own right, but the way she flummoxes Holmes, and sometimes Watson, is just delightful. Holmes meets his match as they play cat and mouse, leading to an exciting victory for Sherlock in the end, which is all the more tragic for how it hurts Adler — all capped off with a delightful epilogue. The mysteries that need solving in this aren’t the best in the show, but they all further the fun dynamic at play between the characters. The passage of time in this episode helps to really nestle Alder into Sherlock’s psyche, making for a great standout adventure for everyone involved. A Scandal in Belgravia was a perfect example of the show inserting a classic literary character into their new canon, and a quality adventure overall.