← There Were So Many Things Wrong With Ninja Turtles: Out of the Shadows
Hench-Sized Comic Book Reviews – 11/5/16 →

By the Crimson Bands of Cytorrak, Marvel Studios have done it again! The mystical and magical Doctor Strange is another entertaining success, blending some wild visuals and inventive action with a  pretty great cast of characters. It definitely follows the Marvel formula at this point, but as a comic book geek who has loved every Marvel movie so far, that doesn’t really bother me.

Sure, I wasn’t blown away by any sort of masterpiece, but I had a blast at Doctor Strange. 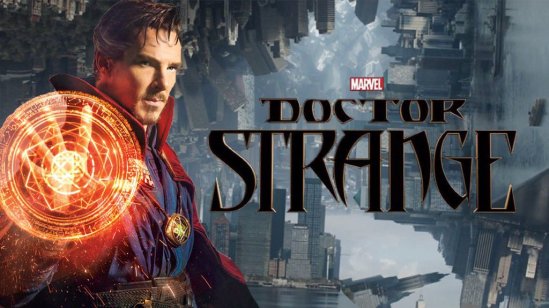 Marvel makes good movies. They might not be Oscar worthy or emotionally powerful, but considering how enjoyable their movies have been, that sort of thing would be extra icing on the cake. Marvel produces solid, worthwhile entertainment using a variety of interesting characters, tapping into different genres and movie styles to at least try something new each time. Doctor Strange is a crazy CGI roller coaster that doesn’t get bogged down in the computer madness. The movie never loses touch of Benedict Cumberbatch in the lead role. And it has fun with all the weird and wild concepts it introduces.

Considering everything already in the Marvel Cinematic Universe, Doctor Strange succeeds in carving out its own niche and making us eager for more. I can’t wait to see some of these characters again and learn more about their mystical world.

Join me after the jump for my full review! There will definitely be MAJOR SPOILERS for Doctor Strange.

So yeah, the movie is formulaic, sometimes to its detriment. Doctor Strange is about an arrogant and wise-cracking genius who goes on a journey of superheroic discovery, complete with love interest and black sidekick. In the end, he saves the day from a very specific threat and becomes dedicated to heroism. Yeah, yeah, yeah, we’ve heard it all before. And sure, it would be nice if Marvel tried harder to do something different. But at the same time, there is a lot about Doctor Strange that needs to be explained. Movie-goers will understand ‘magic’ in its basic form. But Doctor Strange has its own unique world of magic to play with, and I don’t mind doing another origin story to properly explain the ins, outs and all abouts.

I still don’t know what this is all about

Because the magic and mysticism in Doctor Strange is just plain cool. Casting spells is about channeling the energy of the Multiverse. There are mystical artifacts that are imbued with magical power that humans can’t contain. The Eye of Agamotto is an Infinity Stone and controls the flow of time. They gave a cute name to their teleporter rings. The Cloak of Levitation is semi-sentient. It’s all pretty darn neat and the movie does a fine job introducing and explaining the various pieces of new lore.

This is where the CGI comes in, and it’s great! From Strange going on an insane trip through the Multiverse to the final showdown with Dormammu (more on him later!) to the basic handheld weapon and shield spells that everybody summons, the movie looks amazing! They shift and reshape the very fabric of reality and the bricks in the buildings to create some truly splendiferous visuals. This is a fun movie to watch.

The characters were another high point. Benedict Cumberbatch was a big draw as Doctor Strange, and once again, Marvel cast the perfect actor in the role. He’s intense, he’s charming, and he proves to be nicely heroic in the end. Chiwetel Ejiofor is great as the sidekick, Mordo, though it’s kind of a thankless role. Hopefully he’ll have a bigger, better role in the sequel. Benedict Wong is fantastic as the surly but supportive Wong. I definitely look forward to him and Cumberbatch building their friendship/partnership. The sorcerers in this film are fantastic.

Not to defend whitewashing in Hollywood, which is a real problem, but I liked Tilda Swinton as the Ancient One. Marvel does what they can to fight the racial stereotypes of the mid-20th century comics, and sometimes changes are made. Yes, Strange goes to the Far East to learn mysticism, but the magic school is a multi-cultural academy. Yes, they changed an Asian male character to a white woman, but the ancient Asian martial arts master is a pretty awkward stereotype. Plus, Swinton is just such a specific actress that she makes the character her own. She’s just plain cool, and her big heroic moment is great.

Yes, Marvel should have cast an Asian actor as the Ancient one, male or female, but I was happy with Swinton in the role.

One character I didn’t care for, though, was Rachel McAdams as the love interest, Dr. Christine Palmer. McAdams was fine, but if I thought Mordo was a thankless role, this one would have been better off on the cutting room floor. Giving Doctor Strange a romance subplot added nothing to the film and was the most painfully forced formulaic element. Doctor Strange had more than enough going for it without the needless romance stuff, which was pretty much dropped by the time we got to the finale anyway. Dr. Palmer just wasn’t a very compelling character to any degree, not like Peggy Carter in Captain America or even Jane Foster in the Thor movies. She just didn’t have presence. Plus, all the magic school stuff was infinitely more interesting anyway.

Who are you again?

The villains also got a pretty short shrift. Mads Mikkelsen is some kind of acting god, and would master any role he’s given. But Doctor Strange wasted him as some nobody named Kaecilius. He basically just exists to be the antagonist without any real depth or personality, beyond general Mikkelsenishness. He’s also got a team of nameless henchmen that don’t serve any purpose.

Once again, Marvel just failed when it came to giving us a really cool, badass villain. Why do they keep picking the loser characters as bad guys? Kaecilius, Malekith, Darren Cross, Ronan the Accuser; it’s just plain weird at this point. 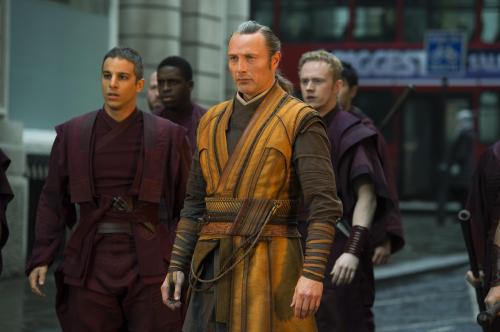 At least Dormammu was kind of cool. They kept name-dropping him, and I thought for sure that Mads Mikkelsen would end up playing Dormammu, or being possessed by Dormammu. But in the end, he’s a big CGI head. I loved the trickery that Strange used to beat him, but I was a little…underwhelmed by Dormammu. I can’t really put my finger on it. I guess I would have liked him to be a bit more monolithic. Dormammu could have used some fire and/or doom to really up his evil factor, instead of just being some squiggly CGI.

Also, one final thought, I kind of felt this movie was a little too quick and loose with Doctor Strange’s growth as a sorcerer. He gets into his life-changing accident almost immediately, which I suppose is fine. We don’t need to focus the movie on him being a doctor. But then he’s accepted into the magic school almost immediately, and there are a ton of other students learning magic. I didn’t really the Ancient One had such an open school.

And then Doctor Strange is the best sorcerer in what feels like a quick amount of time. Suddenly everybody is following his lead and telling him to fight and letting him stroll around with the Eye of Agamotto like it’s no big deal.

This nitpick doesn’t break the movie, obviously. It’s just something that sort of struck me while I was watching.

Doctor Strange is another awesome Marvel movie. It’s hugely entertaining and introduces us to a whole new, very fascinating corner of our favorite cinematic universe. It’s got a stellar cast, despite a few less-than-developed side characters, and I can’t wait to see Strange interact with the Avengers, or even just star in a squeal showing off more awesomeness.

← There Were So Many Things Wrong With Ninja Turtles: Out of the Shadows
Hench-Sized Comic Book Reviews – 11/5/16 →