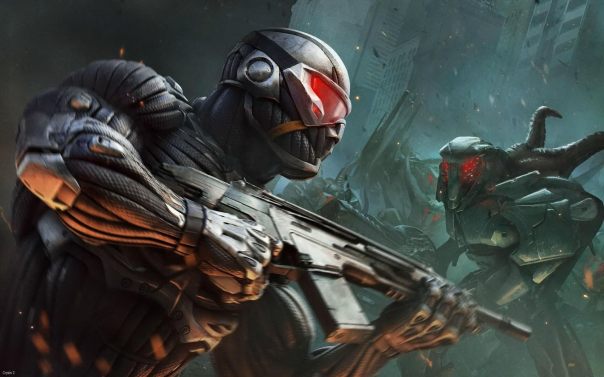 In my mind, Crysis is one of the most underrated first person shooters that I know of.

Released in 2007, the first Crysis went virtually unnoticed against such competition as Halo 3, Call of Duty 4 and Gears of War.  It was a treasure waiting to be excavated by gamers like myself.

The protagonist was a member of a special unit of highly-trained soldiers wearing experimental “nanosuits” like the one shown above.  The nanosuit offer a range of special abilities to be activated in-game, including super-speed, super-strength, a cloaking device, and armour-plating which added a refreshing new dynamic to the old “Supersoldier kills hordes of aliens” trope made popular by Halo.

Your unit in Crysis was sent to a remote island to fight a North Korean threat.  The short version of the story is that the North Koreans in Crysis woke an ancient, hibernating alien race beneath the earth.  Picking up where the first Crysis left off, Crysis 2 began with an alien plague that had wiped out much of Manhattan’s population and brought the city under marshal law.  A new main character found himself in command of one of the aforementioned nanosuits, and the fate of New York City (and by extension, the world) rested on his shoulders as the Big Apple found itself being invaded by the alien threat unleashed in the first game:  called The Ceph.  He defeats the Ceph hivemind, and the world is saved…until now.

The aliens have been defeated, and in between Crysis 2 and 3, your character has been in stasis for several years.  When your friends wake you, you come to find that New York City has become a dystopian police state, overgrown with dense jungles.  The oligarchy therein has been using the aliens’  mothership, called the “Alpha-Ceph” to provide unlimited energy to the city’s citizens who are still alive.  Obviously, things go awry, and only one man can save the world.  Again.

Don’t linger in the tall grass.

The storyline, while complicated at first, is easy to follow; with a menu option called “Previously on Crysis” to provide any necessary background.  And the gameplay is phenomenal.

I can’t say enough good things about the gameplay in Crysis 3.  Smooth, intuitive controls blend with quick cycling of abilities like your cloaking device and armour plating, and even the ability to power-kick cars and large piles of debris toward your enemies.  A new weapon in your arsenal, the bow, allows you to strike enemies from long distance with extreme force and varying types of ammunition without becoming uncloaked, giving you a new tactical advantage in the field.

But that’s not to say that you’re a one-man army.  You’re a special operative, and while you have incredible powers granted to you by your nanosuit (powers consume energy, which recharges over time), running headlong into enemy ranks and firing will earn you nothing but a folded flag presented to your next of kin.

This means that you’ll have to out-think and out-maneuvre enemies rather than risk a direct confrontation against multiple squads.  Scouting is imperative, and hacking (a new feature) into equipment like turrets and landmines around the environment will save you a lot of risk and a lot of ammunition. The game forces you to think tactically in your approach to situations and enemies, without sacrificing its quick, satisfying pace.

My one, sole complaint about the game is that vehicles seem almost arbitrary, and clunky vehicle controls take much of the fun out of driving.  Apart from that, Crysis 3 has proven to be a standout in this season’s games lineup.