← Peter Parker vs. The World
Y: The Last Movie →

The Day I Killed Hitler

Stargazing was a bit different in 1944

Sniper Elite V2 casts you into the role of a rugged, chiseled, surprisingly well-coiffed sniper at the end of WW2. With an emphasis on stealth, long-range shootouts and setting traps, this game is beautifully detailed and far more satisfying than the majority of WW2 shooters I’ve played. 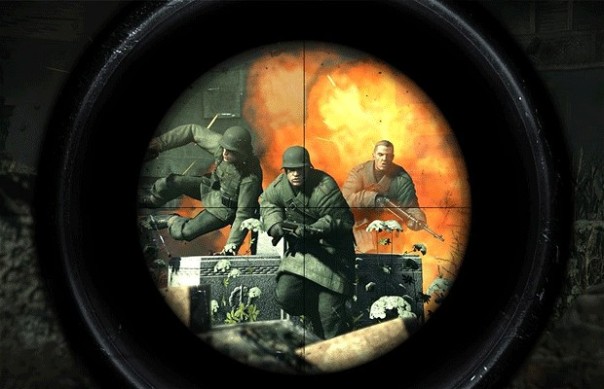 It’s always the one in the middle.

With a spring in your step and a song in your heart, you traipse through the rubble of Berlin with your trusty sniper rifle, utterly annihilating any opposition that stands in your way. Most of your kills will result in a slow-motion presentation that follows your bullet from the barrel of your gun on its merry journey into the body of the least-fortunate nazi in the world. This is combined with an x-ray display of exactly how horribly your victim died (in the same vein as Mortal Kombat 9), just before a score is presented on your screen, rating any given kill you make. 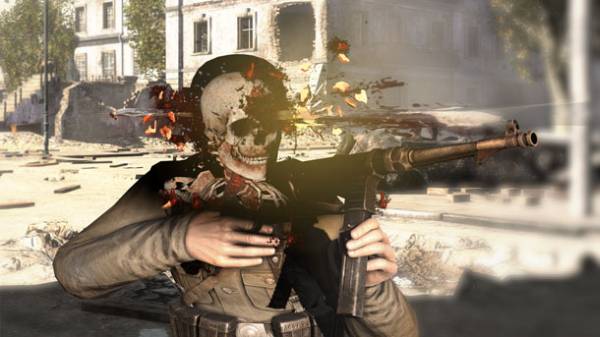 Being both English and Jewish, I can tell you that I always feel a bit of smug satisfaction when I blow a Nazi’s tonsils off, but it’s rare that a gaming system tells me how well I did at snuffing out his life. And while it might seem arbitrary and pointless to congratulate a player on the act of killing a nazi (an average gamer could kill fifty per day and still not find it worthy of boasting about), it’s an immensely satisfying feeling when I get a high score for a beautifully-rendered, often gruesome kill. It feels a bit like getting an outstanding mark on my report card, or winning a cheap prize at a boardwalk game booth.

The game plays smoothly, and the graphics for the PC version are extremely detailed. In all, you receive a very deep, gratifying gaming experience for your money, with only a few real gripes about it.

For one thing, almost every encounter ends in a firefight. And while that’s half the point with most WW2 shooters, it somehow feels as though you’ve failed as a sniper when the entire population of the Nazi Germany turns on you after your very first shot. And while the game offers you chances to conceal your activities while sniping (timing your shots with the explosions of bombs or the chimes of churchbells, for instance), you usually don’t have too much stealth to your advantage afterward. At this point it stops being about killing a specific target, and more about killing Everyone.

Thankfully, they haven’t yet discovered the concept of Nazi zombies.

As you assassinate every Nazi in the world and deal with Soviet soldiers on your mission to kill a group of Nazi V2 Rocket scientists all by yourself, you get the distinct feeling that not only are you winning the War single-handedly, without an Ally in sight.

The multi-player experience allows for less stealth, as a team of two is far easier for the enemy to spot, but it’s nearly as satisfying as the single-player mode. Using teamwork and a shared hatred of nazis (but sadly no baseball bats), your partner takes the role of an anonymous, somewhat generic fellow soldier as the both of you engage in a wholesale slaughter of the Third Reich.

If you’ve beaten the campaign, however, and your craving for goose-stepping aryan blood isn’t sated, you can kill Hitler for a little extra in the game’s only current DLC.

Some experiences may vary.

Sniping Hitler sounds more satisfying than it is, however. For one thing, the DLC is single-player only, in the form of a Challenge-level. Here, you’re thrown into a parallel reality in which Der Handlebar arrives at a train station by motorcar, and you are there to take the shot that ends his life.

Your objective is to sneak to a vantage point before Hitler arrives, and snipe him on his way to the train. You’re spotted, however, and it becomes a Nazi shootout with the Fuhrer darting from one bit of cover to the next. Once you’ve killed every nazi in the level, Hitler rushes to the train itself, and you have a window of about five seconds to snipe him in mid-sprint.

Before I played this, I wasn’t sure if any game company could ever take the gratification out of the possibility of blowing Hitler’s moustache off, but Rebellion Games has succeeded. Killing Hitler is something that should be savoured. It’s something that you should take your time doing, and enjoy it as long as you can.

While I can appreciate that it’s a CHALLENGE map, the challenge should have been getting into position and getting away with killing the Nazi leader–not in the assassination, itself. This could have been done in any venue: Sneaking into a building overlooking one of Hitler’s speeches, or shooting him through the window of his estate, or a diner. The fact that he knows its coming and does everything he can to evade it completely eliminates the point.

As a game, I can’t recommend Sniper Elite V2 enough. Despite a few minor flaws, it’s an amazing romp through the second World War and I’m happy that I got to experience it.

As for the Kill Hitler DLC, there are two additional rifles that it offers aside from the three available in the Campaign mode that you may enjoy, and despite the linear, joyless method in which you have to complete the mission, you can still glean some satisfaction in killing the greatest monster of the 20th century.

← Peter Parker vs. The World
Y: The Last Movie →