← Star Wars is Doing a New Thing Called The High Republic
This Westworld Trailer Has An Awesome Song In It! →

6 Thoughts on the First Season of Harley Quinn

Good golly, Miss Molly! The Harley Quinn cartoon show was an absolute delight! I had high hopes for the series after seeing the first few trailers. Then the show captured me from the very first scene of the very first episode! A sharp, visceral cartoon that wasn’t afraid to be vicious, while also telling a very good, character-focused story.

The Harley Quinn cartoon ran for 13 episodes on the DC Universe streaming service, with the final episode airing this past Friday. The next season is right around the corner in April, and I am thrilled! Harley Quinn is a hard R-rated show that doesn’t skimp on the violence and language, while making sure to use all of that to be funny and smart. It’s a triumph of well-written humor, voice acting, storytelling and more! Not every episode was a masterpiece, and there were some poor choices here and there, but overall, this first season was phenomenal television!

Join me after the jump for my thoughts and full review on the first season of Harley Quinn! Expect FULL SPOILERS for the season!

Premise: Harley Quinn finally realizes that her relationship with the Joker is toxic and abusive and she leaves him. Rather than fade into obscurity, Harley decides that she’s going to prove she’s good enough to join the Legion of Doom, and puts together her own criminal crew, consisting of King Shark, Clayface and Dr. Psycho, with her BFF Poison Ivy around to support her. The show is then about Harley coming to terms with herself as a person, her toxic relationships, her good relationships, and what she really wants out of life, all with a focus on how breaking up with the Joker was important character growth.

I loved this show! From the opening scene with Harley and Joker on the yacht, I was hooked! The violence and language did not hold anything back, and that sharp crack of action and dialogue made me sit up and take notice. Some people might complain about the use of cuss words, but I think Harley Quinn did right by them, using them in a proper way to humanize the characters and add some color to the dialogue. That really caught hold of me right off the bat, and I think the first episode is one of the show’s best! And from there, Harley Quinn just kept doing everything right! They established a really great main cast, with a wonderful interpretation of Harley right at the center. And then the larger supporting cast was so damn good and so damn funny!

There were some episodes that were more filler than perfection. And there were some story choices and individual episode choices that weren’t always home runs. And perhaps this first season wasn’t some grand drama a la BoJack Horseman. But it was funny as hell, full of energy and used all of its DC characters to near perfection! 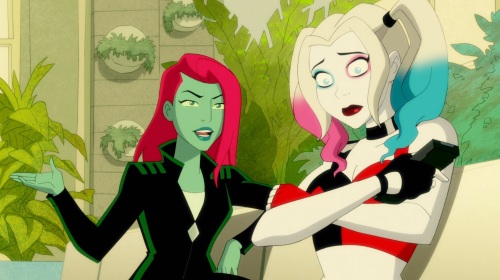 A lot of people can be very picky about who voices Harley Quinn. Obviously we all loved Arleen Sorkin in Batman: The Animated Series, but a lot of people have voiced Harley since then. I felt actor Kelly Cuoco did a stand up job as Harley. I never watched The Big Bang Theory, I only know it from its poor reputation, but I felt she really owned the character in this cartoon. She was great with the snappy jokes and the meaningful conversations with her friends and loved ones. She brought a lot to the Harley character.

Beyond Cuoco as Harley, everyone else was so good, too! Lake Bell was tough, firm and caring as Poison Ivy. Alan Tudyk brought a lot of gleeful menace to the Joker! I wasn’t so much a fan of his Clayface, but he was great as the Joker! Diedrich Bader knows how to do Batman well and was fine in the role. Ron Funches as King Shark, Tony Hale as Dr. Psycho, Christopher Meloni as Commissioner Gordon; the list goes on and on for great voices! I especially loved James Adomian as Bane and Rahul Kohli as the Scarecrow. I’ve been a fan of Adomian’s standup for awhile and couldn’t even recognize him as a comedic take on the Tom Hardy Bane. And making Scarecorew British was a great!

4. Both the humor and the emotion depth were on point! 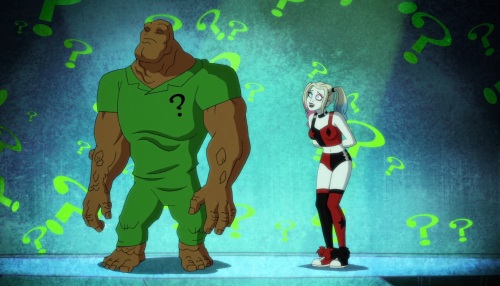 The writing staff of Harley Quinn seemed to tap directly into my brain for the jokes and humor. I like wit. I like dry humor. I like dialogue and character-based stuff. And this show had it in spades! I loved the banter, the chatter, the quick asides, the little remarks. It’s hard to put into words, and I don’t have a ton of clips to really show it off. But just the flow of conversations, the self-referential nature of the dialogue; all of that worked gangbusters for me! Phenomenal writing!

And then the show took it one step further by having real emotional depths and meaningful themes. This was a show about surviving a break-up, about bettering yourself on the other side of the break-up. One might expect a show like this to only be about the gags, or only be about the superhero action. But Harley Quinn wanted to tell a real story with real-ish people, and I think they pulled it off nicely. The dramatic moments really stuck for me as it explored Harley’s psyche and her sense of self. That made the show more real.

Now she can never go back

A lot of DC cartoon purists insist that Harley Quinn should only ever wear her original Animated Series costume. It’s a good costume, but it was definitely a product of its time. Harley Quinn has moved beyond that costume, the Joker and the relationship it represented. And I really liked how they used the costume to represent that very thing in the final episode. The costume became symbolic of her toxic relationship with the Joker, something he would parade around. So Harley claiming her own look was all the more important. I really liked that symbolism in the finale.

2. I am legit torn on Poison Ivy’s love life

This one is hard to decide. I am a 110% advocate for DC and Warner Bros. cutting the crap and just making Harley Quinn and Poison Ivy a canon couple. It would be the most perfect, widely accepted and mainstream LGBTQ+ relationship in in the superhero genre, one that could exist in comics, cartoons, movies and more. But they won’t do it! They might even be shying away from it recently. They definitely didn’t do anything to even hint at a relationship over the course of season 1 and I find that very annoying! What are they running from? It’s 2020! Embrace it and let all of us embrace them as well!

On the other hand, I really kind of like the Ivy/Kite Man relationship the show did give us. One of my favorite tropes in fiction is when a bad guy is allowed to act like a realistic good guy. And Kite Man going from joke character to Ivy’s boyfriend over the course of the season was a cute subplot (while still being a joke character). Kite Man was another triumph in voice acting, and the writers clearly loved what Tom King did for the character in his recent run of the Batman comic. So to then take the silly Kite Man and turn him into a legit person, one who was good enough for Poison Ivy to fall for him, was pretty cool! Even if he stayed pretty darn lame right up to the end. 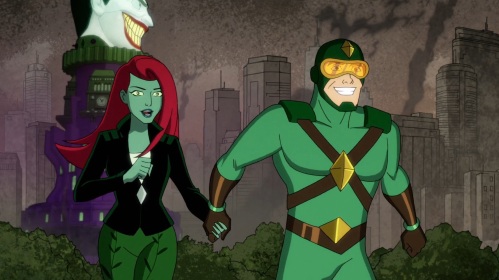 But we kind of need this too!

But still, Harley and Ivy would be so much better! Thankfully, showrunner Justin Halpern has since given a pretty meaningful explanation for why they didn’t just dive right into Harley/Ivy in an interview with Geeks Worldwide. He explained that neither Harley or Ivy is in a stable enough place at the start of the show to commit to a new long-term relationship. The writers want to earn that sort of relationship over some prolonged character development. And that is pretty much the perfect reasoning. So consider me willing to be patient!

1. Bring on the Suicide Squad!

Season 2 is right around the corner and there’s likely no influencing the creators at this point, but I’d love to see Harley join the Suicide Squad in a future season. This current season was all about finding her own feet, getting over the Joker and self-actualizing — and Harley succeeded at all of it! So the show will need new stories and adventures going forward, and it’s not afraid to go big, with real change. At some point I’d love to see Harley leave her current crew and be forced onto Task Force X. That could be a whole season instead of just an episode or two. I’d even be down with Harley having a fling with Deadshot like she did in the New 52 comics. She could use more friends/allies outside of her immediate people.

Likewise, Clayface, King Shark and Dr. Psycho deserve subplots of their own! Have adventures! Branch out! Let’s just go for broke with Harley Quinn! I want a million seasons! I want a million new adventures! Maybe Red Tool? The Gang of Harleys? The Birds of Prey? The possibilities are endless and I can’t wait for this show to take advantage of all of them!

← Star Wars is Doing a New Thing Called The High Republic
This Westworld Trailer Has An Awesome Song In It! →