← If You’ve Got Ron Howard, Use Him
Making Fun of Those Chevy Commercials is Never Not Funny →

A new age of comics is upon us! The Avengers is getting a more back-to-basics relaunch this week, and it ain’t half bad. And Justice League is do for a crazy wild relaunch in a couple weeks. That should also be fun.

Honestly, I think The Avengers #1 is Comic Book of the Week. It’s a pretty momentous issue, finally re-uniting Captain America, Iron Man and Thor at the core of the team. That’s pretty neat. And, like I said, Jason Aaron does a solid, exciting job. 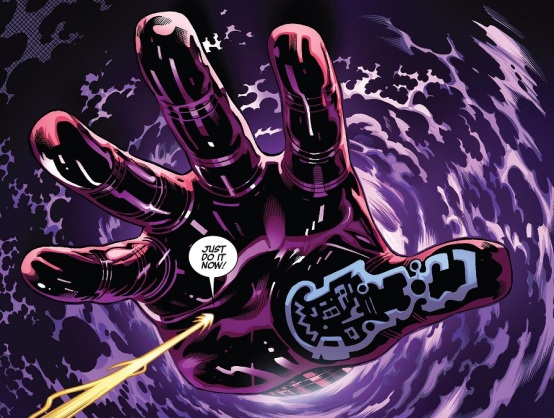 Meanwhile, the Rogue & Gambit mini-series came to an end and it was delightful! I want Kelly Thompson on more X-Men stuff! Any fan of the two characters, especially as a couple, need to read that comic!

I was never an Avengers comic book fan. I was a Spider-Man/X-Men kid growing up, and I just never connected with the likes of Captain America, Thor or Iron Man. I don’t even know if there’s an entire Avengers comic run that I’ve read.

But I love me some Jason Aaron these days, so let’s see what he can do with this relaunch!

One million years ago, there was a pre-historic version of the Avengers made up of the various ancient superhero identities. There’s Odin, the Phoenix Force, Agamotto, the original Black Panther, the original Starbrand, the original Iron Fist and the original Spirit of Vengeance. They stood watch over prehistoric man and battled some Celestials.

In the present day, Steve Rogers, Tony Stark and Thor get back together for a drink now that all of their lives have calmed down for the first time in awhile. Steve floats the idea of teaming up to re-form the Avengers, but Tony is against the idea, because there are better heroes for the job, and the last time they tried, it didn’t go well. The decision is made for them when a bunch of dead Celestials start falling from the sky, killed by some new Dark Celestial Reapers. The trio is joined by Captain Marvel and it’s Avengers Assemble time!

Elsewhere, Doctor Strange and Black Panther follow clues from the One Million BC Avengers to the center of the Earth, where a bunch of alien bug pods start opening and heading to the surface. Some of them show up in the neighborhood of Robbie Reyes, who turns into Ghost Rider and starts fighting them. And Jennifer Walters is trying to live a nice life in Manhattan.

This is a solid, enjoyable first issue. Aaron has a lot of ground to cover, and there’s definitely a sense of marking off a checklist, but he’s a total pro and he absolutely makes it work. He introduces all of the characters and is able to establish at least a bit of each of their personalities, even finding time to bounce them off each other. That’s definitely a good start. There’s a real sense of both camaraderie and exasperation between the three leads as they talk over the very real, very important topic of restarting their own Avengers. Aaron goes out of his way to mention a ton of recent continuity, and it’s both awkward and informative.

Now that that’s out of the way…

Aaron also doesn’t get bogged down in exposition. He relies heartily on the Herculean efforts of artist McGuinness, who does some career high work of showing dead Celestials crashing into the Earth. That’s a very physical and visual threat that’s easy to establish, and really raises the stakes for this first issue — even if it falls into the trope of killing off some previously powerful threats to show just how powerful the new threat is. But that doesn’t bother me. Even though I doubt McGinness is going to stay on as the permanent artist, he does a phenomenal job in this big first issue.

TL;DR: It’s a little wonky at times as it tries to do everything at once in continuity, but The Avengers #1 does pull off everything it needs to for an exciting, character-rich first issue relaunch. 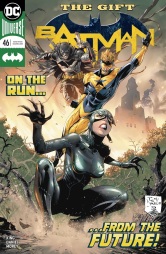 I’m just not feeling this one. Nobody give Tom King a Booster Gold comic.

One year has passed since Bruce Wayne broke Booster Gold’s time machine. Now Booster has gone a little stir crazy and he breaks Selina Kyle out of Arkham. She’s a serial killer who only speaks in cat noises, and who has some kind of violent history with Thomas Wayne (who recently suffered a heart attack and has the whole Wayne family on edge). Booster makes her a rough, sewn together Catwoman costume and takes her to Wayne Manor to have a ‘meet cute’ with Bruce, since he’s is convinced that love will conquer all and everybody will realize they need to work with him.

When they arrive, Catwoman promptly murders Alfred and Thomas Wayne, then the homicidal Batman shows up and accidentally shoots Martha Wayne. Then Bruce picks up the gun and starts firing. In the end, everybody but Bruce is pretty much dead or severely injured.

This story is a little too weird and a little too crazy for my tastes. It lacks King’s usual spot-on character focus, probably since it’s dealing with a weird, haphazardly-designed alternate timeline. We only get hints at what this Bruce Wayne is like, and everybody else is very basic and very simple. Batman has no depth and is just a killing machine to serve the story. Catwoman is cray cray and therefore doesn’t have much depth. Thomas Wayne gets the bulk of the character development, but even then, there’s just not much to work with. The only one who gets any real work in this story is Booster Gold, and he’s clearly off his rocker for some unexplained reason.

He’s got the Time Madness

Booster Gold’s own craziness keeps him at arm’s length, so there’s nobody to really connect with in this story. And the alternate timeline King has created isn’t all that interesting or attention-grabbing either. There are some cute bits — like how Jason Todd runs a company that put Tasers into tires to stop people from stealing your tires — but that’s not enough to sell me on this world. I haven’t disliked a Tom King story this much since the opening storyline.

TL;DR: I’m not sure what King and Co. are doing with this weird alternate timeline story. It’s a little too weird and a little too unfocused for me. 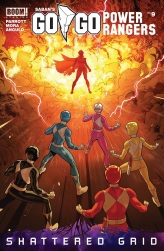 Shattered Grid is fine and all, but I’m mostly interested in what happens to Matt!

In Drakkon’s home universe, Kimberly became a badass archer warrior on the side of the good guys…until something happened and she joined up with Drakkon, getting her Power Rangers power back and becoming even more of a badass archer warrior Ranger. Now she’s traveled through dimensions to rescue Drakkon, only to wind up back in the time period of Go Go Power Rangers. She faces off against our heroes, even revealing her identity, but flees when she realizes she arrived in the wrong year. The Rangers and Zordon have no clue what to make of this.

Meanwhile, Matt is avoiding everyone’s attempts to check in on him after his ordeal being Rita’s prisoner.

And later, Rita meets up with Evil Kimberly and offers to help.

There’s not much to this issue to contribute to Shattered Grid, but that’s OK, because the story of badass archer warrior Pink Ranger is still pretty cool. I was hoping she’d turn out to be a lone wolf rebel against Drakkon, but it’s fine that she’s one of his soldiers. Her costume is badass, and the scene where she interacts with the other Power Rangers is just great. Parrott is fantastic with dialogue and character interactions, and that scene is the highlight of the issue. He’s also got a bunch of smaller moments that are just as great, like Rita reacting to this new Power Ranger, or Billy thinking he could bond with his Zord if he did his homework in the cockpit, while morphed. It’s fun little stuff like that that makes Go Go Power Rangers a great companion comic.

TL;DR: However little an impact this series will have on the larger crossover, it’s still a fun comic with a delightful focus on dialogue and character.

← If You’ve Got Ron Howard, Use Him
Making Fun of Those Chevy Commercials is Never Not Funny →